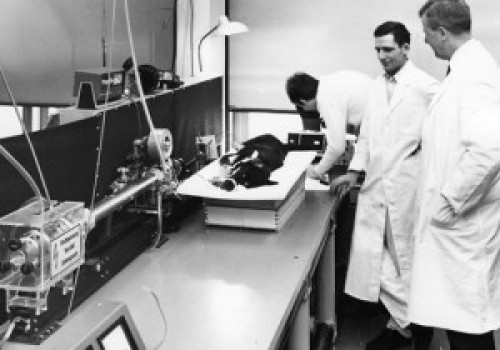 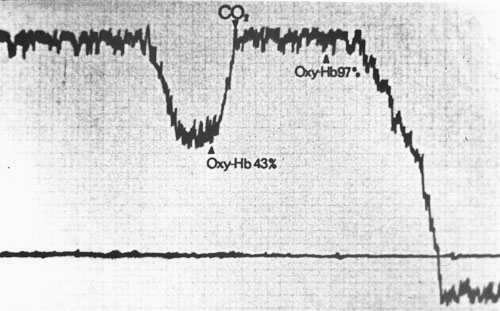 Current medicine is increasingly employing more and more modern physical and technical procedures for diagnostics and therapy. The development and research of new methods will only then reach the optimum when specialists in the medical field collaborate with those in physics and technology in order to coordinate their specialized knowledge. The apparatus possibilities and the knowledge on hand for laser and microwave technology in the Institute for Plasmaphysics gave Dr. med. Nils Kaiser the opportunity to study the questions of medical diagnostics with laser light, which had preoccupied him in theory for a long time. The preliminary results already open up interesting perspectives for future medical diagnostics.

Biological metabolism is seen chemically as an alteration of molecules. When the existence of the individual molecules can be verified and their type determined, then inferences on the biological procedures can be drawn. Molecules with differing structures have differing resonances for electromagnetic radiation. Thereby the typical molecular resonances lie in the range from near and far infrared to the microwaves.

By measuring the molecular resonances and their changes, in the course of time it is possible to register metabolic procedures. Thereby the step from chemical analysis on a sample probe to measurement on a living organism under physiological conditions is not far.

Initially suitable experimental objects would then be e.g. bacterial cultures, bloated tissue or an extra corporal circulation through a corresponding cuvette, as is currently common in heart operations and artificial kidney transplants.

With the equipment available up to now these experiments in the interesting wave ranges are not yet possible, since the self-absorption of the water of a substantial component of all biological objects is very high in these ranges. The currently used generators in IR-spectroscopy have such a low transmission power that even thin water layers can not be penetrated. Modern Laser technology opens up new possibilities here.

In the institute for Plasma Physics measuring stations with 3cm-, 8mm- and 4mm- generators were set up, whose intensity is sufficient for biological experiments on aqueous tissues of 1 cm thickness. Phase position and intensity of the coherent wave can simultaneously be measured dependent on the time and the frequency. Due to the simultaneous measurement of phase position and intensity one receives a considerable improvement in the desired information compared to the single measurement up to now of the attenuation with the infrared technique.

Two types of measuring stations were developed: in one the frequency can be tuned via a broad band, in the other a resonance dependent on time can be tracked with a fixed frequency setting with very high sensitivity. The first one serves to discover the resonances of interest such as e.g. unknown short-lived intermediate products of metabolism.

The measurement of the phase position is important, since during the execution of the experiments it turned out that the phase shift or displacement often showed more significant results than the attenuation. Preliminary results yielded the determination of the cis- and trans- dichlorethylen. The cis-form of this molecule has a Dipolmoment of 1,85 Debye, the trans-form of 0 Debye. 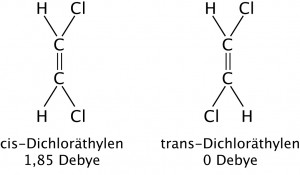 Under certain conditions due to Brom as the catalyst trans-dichlorethylen will be converted into cis-dichlorethylen through irradiation of UV light. The conversion process was tracked continually.

At the 3 cm-measuring station apart from the cis-trans-isomerism of the dichlorethylen also the dielectric constant of the aqueous haemoglobin- solution from native Lind haemoglobin as well as from erythrocyte- suspensions was measured.

In the transition from oxygenated to de-oxygenated haemoglobin clear leaps were seen both in the phase position as also in the attenuation as a result of the change in the dielectric constant.

In medicine it is preferable to conduct diagnostic tests on a living organism, since tests on parts of tissue or blood that have been removed from the body do not mirror a proper living situation. Notwithstanding that, the Laser is a modern resource. In the Institute for Plasma Physics the technical requirements in Laser technology existed to develop an apparatus with which laser diagnosis of blood in a living organism could be carried out. Thereby blood is examined in an extra corporal circulation.

At the „3rd International Biophysics Congress of the International Union of Pure and Applied Biophysics” in Cambridge/Mass. Dr. med. Nils Kaiser presented the main features of the apparatus developed by him. At this point in time, September 1969, it had not yet been examined whether the extra corporal circulation could be sustained in the necessary dosage. On 12th December experiments were carried out on a living dog, whose blood was channeled through a measuring cuvette where it was irradiated with Laser. The photographic records prove that the irradiation of blood in an external circulation of a living animal is possible. The experiment was conducted in collaboration with Dr. Meßmer, private lecturer at the Institute for Experimental Surgery at the University Clinic of Surgery, Munich.