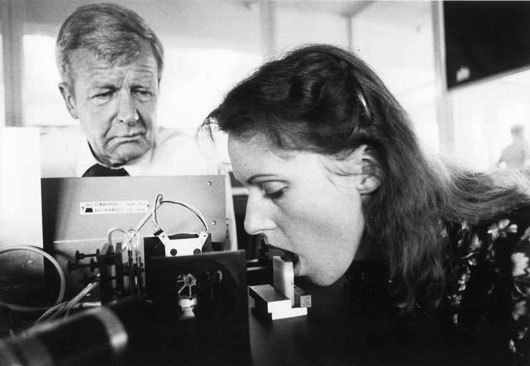 The system developed by Dr. Kaiser of a laser spectrometer with an ATR plate - centre of photo, where the patient is pressing her lip onto it - is an absolutely new development in laser absorption spectroscopy.

A "by-product" resulting from research work on the controlled fusion of atomic nuclei may soon perhaps contribute towards considerably lowering the costs of medical tests. Dr. Nils Kaiser from the Max-Planck-Gesellschaft for Plasmaphysics, Garching, Munich, developed a measuring procedure - non- invasive and non-damaging for the patient - with which the concentration of differing materials in blood can be significantly assessed more exactly than in conventional methods: A prototype of this device, which functions according to the principle of infrared spectroscopy and above all lends itself especially for the purpose of early diagnostics, is currently under construction. With this the content of alcohol (ethanol), sugar (glucose), fat (cholesterol) or uric acid in blood can be determined.

"When a patient goes to the doctor because he feels something amiss it is often too late" says Kaiser. "Then the changes in the body, e.g. in the blood vessels, have mostly progressed quite far. Regular blood tests enable the early detection of such illnesses. This is admittedly coupled with inconvenience and requires some effort: the patient must be “tapped”, a substance is added to the blood taken, to ensure that it remains fluid and does not coagulate before finally, mostly due to colorant or enzymatic reactions, the content of products of metabolism, e.g. glucose, can be measured.

"With every blood taken there is a change in the blood” Kaiser emphasises. However, his attempts to change such unphysiological measurement procedures failed at first. 20 years ago when he tested the metabolism of the hearts of guinea pigs with infrared spectroscopy in order to test new medicines, he had to give up. The infrared sources available at that time proved to be too weak for blood tests – above all because the water content always present in organic materials weakens this radiation.

After a study of physics the medical doctor, Dr. Kaiser, as a scientific assistant at the Max-Planck-Institute for Physics and Astrophysics – became acquainted with the innovative methods of measuring of the at that time still "very young" field of plasma physics: The scientists used microwaves to measure not only the instabilities but also the density of ions in plasma for the controlled fusion of atomic nuclei.

However, it was the use of lasers for plasma diagnostics that first brought the breakthrough also for blood tests: for example, the carbon dioxide – (CO2) light intensifier supplies sufficient strength for infrared-radiation. It is spread evenly on the object to be measured via a so-called ATR (= attenuate total reflection) -plate – it works with cushioned total-reflection – : these are for example mucous membranes that are well supplied with blood such as the lips. The infrared light of the CO2 laser (wavelength: 10,6 μm) penetrates deeply through the somewhat 1 to 3 thousandth millimetre (μm) thin cell walls approximately 3 wavelengths (approx. 30 μm) and stimulates the molecules in the blood into vibrations. Thereby every type of molecule absorbs (“swallows”) certain typical parts of the laser light specific for that molecule – and absorbs the more the larger the concentration of this material is in the blood: in so doing the resulting “absorption bands” supply characteristical "finger prints" of the substance being searched for. "This functions in principle like a perfectly ordinary infrared spectroscopy" Kaiser confirms.

An alcohol test of the future will only need the lips to be pressed hard against a plate irradiated by a laser light. With this, according to Kaiser, one will be able to exactly measure the alcohol level of blood down to one hundredth per mille, and indeed the actual level - not the level, that up to now must be calculated in retro after taking blood.

However, Dr. Kaiser feels that the application of his procedure for early diagnostics is of more importance than a simplified alcohol test. “With this apparatus, within the framework of tuberculosis prevention, one could link up with the mobile X-ray unit mass tests and at the same time measure cholesterol, glucose or uric acid levels in blood. This “screening” would enable the identification of patients with deviating blood levels and a prewarning could be issued.”

This blood measuring procedure could bring a great relief to sufferers of diabetes. "If a patient could measure the glucose level in his/her blood several times a day totally pain free, he/she would gain a feeling for the amount of insulin to be taken dependent on food intake and sport activity“ Kaiser explains. In principle the blood measuring procedure developed by him would also be suitable as a blood glucose sensor for the control of an artificial pancreas: Patients suffering from diabetes could be provided fully automatically with the insulin essential for life. However, these are for the time being “visions of the future”. Admittedly with Kaiser‘s method the blood components can be measured under exact physiological conditions, that is, the values present in-vivo, i.e. in tissue, to which alone the control mechanism in the organism responds, can be exactly determined. However, the laser of the measuring unit is still quite cumbersome. ”Ideal would be", says Kaiser, "a small laser tunable over a large wave range in far infrared with which one could stimulate preferably many types of molecules”. “Unfortunately this universally usable light does not yet exist". Nonetheless, further application possibilities of the Kaiser measuring procedure in fields other than medicine are already identifiable: for example in the difficult constant control of waste water from paper factories with sulphur content or the control of chemical processes in large industrial chemical plants.

Contrary to an agreement, this press release was not given to me to check before it went into publication. Hence, errors in content could not be corrected by me. In a telephone conversation with Prof. Dr. F. P. Schäfer, MPI for Biophysical Chemistry, dept. Laserphysics, Göttingen after publication I attempted to communicate my views to him. As this was almost impossible to do on the telephone I asked him several times to come to my laboratory so that we could both discuss the possibilities resulting from my apparatus and the readings measured. However, he refused this suggestion. He then wrote a letter to the MPG in which he made defamatory statements in a nasty way regarding me and my work and made incorrect assertions from our telephone conversation. From this time on I no longer received financial support for my work, neither from the MPG nor from the DFG nor from the BMFT.

Even an application for support from the MBB company, Ottobrunn, who wanted my work to continue, was refused by the BMFT, despite the fact that I went to the President of the BMFT in Bonn with some gentlemen from MBB.

Prof. Schäfer did not send me a copy of his letter. By total chance a short time later I acquired a copy of this letter, the content of which then gave me an explanation of the above.

In addition, contrary to the contract, not only were my submitted employee patents no longer financially supported by the MPG but were dropped completely. (See the 330 Citations of my patents that were registered by the patent office of MPG within the period of validity). As a result it is highly likely that both the MPG and I suffered a considerable financial loss.